That REO Speedwagon ballad from 1985, "Can't Fight This Feeling";

Next time you're sitting in the Allergist's office listening to soft-rock radio waiting out your 15 minutes after your allergy shot (to make sure you don't have a funny reaction before you leave) and it comes on, fold your hands, put down the 3 week old PEOPLE magazine and really listen to it. It's got it.

I always felt this, but this morning I understood why.

If you could speed up the song from ballad tempo to mid tempo, you'll see that it's total REO. Kevin Cronin's vocals, from melody choices, to his little inflection hops he does are all there, just slowed down. If the 1985 synth piano was removed from the intro & outro and it was just acoustic piano, and the drums weren't overly processed, you'd hear this song being as classic as the other REO we all know and love. Huge chorus, Mt. Olympus guitar solo perfectly melded in, song decontructs going out the same way it constructed coming in, Cronin's syncopated vocal melodies where the the last word of the verse dips back down to the same note each line, it's there man.

Forget his smiley cheesy face in the video laying down the vocals, that glossy spittle on his lips making you wanna hit him. Hear the song, and Remember the Cronin who was 80 pounds selling out arenas in the late 70s, hammering that piano with the air raid siren keyboard announcing "Riding The Storm Out", the REO that Dr. Johnny Fever on WKRP in Cincinnatti was always selling tickets to on the air. THAT REO. Cronin with the giant spaceballs Dark Helmet rock hair.

Not today's Cronin imagine (though they still bring it live) 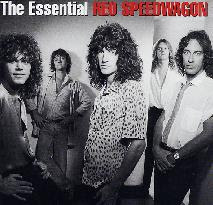 I've been jamming "Roll with The Changes" alot lately because it rocks, and because the cover band I'm in might play it. I borrowed a friend's Live Aid DVD and watched REO at the Philly show recently. I've had musical REO DNA in my system lately, believe you me. Now granted, I really liked the ballad back in the day. I was 14, and a big power ballad with real drum fills in it just did it for ya in the 80s, regardless of your gender. (Sorry 90s kids, we had men singing the ballads we slow-danced to in the gym back then, not Mariah squeal-shattering glasses singing about chumps with Booty ADD).

But I'm tellin ya, 'Can't fight This Feeling' is old school REO if you really listen to the components. Its akin to all of their classics, just wound down about 12 beats-per-minute, with some mid 80s production spritz. (Spritz was big in the 80s ya know.) But the notes man, the notes are there.

Go ahead make fun of me. You're just in denial. It's okay. I understand. Really.

Just remember the only air raid siren you'll hear anywhere near Coldplay is the one the network uses as a hype sound effect edited into the pre-game post-season rally-up breakdown halftime report montage (using 'Speed of Sound' as the music) that makes men who put leather balls in holes and other special places seem like important Delta Squad Halo Terminator Globetrotter Ninjas-On-Fire Starship Trooper Dicks saving the planet and humanity thru...a game.

P.s My Bro Brendan saw REO play in Vegas a few months ago on the roof of Ceasar's, in town for a major covention, all the convention companies had parties with music acts. Said REO anniolated the place.

In other news, my Carlin desk calendar today is great:

"I've had REO DNA in my system lately" can be interpreted in a number of different ways. You sicko.

Shit, you're right.
I am not related to Rod Stewart.