Here's (to you) Johnny

Coincidentally Saturday night I popped my VHS of the Rat Pack special from 1964; Sammy, Dean , and Frank doing a charity concert in St. Louis, and Johnny was the MC. Hadn't watched it in 4 years. He was a last minute replacement it's said on the show. I'm standing in the kitchen, watching the TV from 20 feet away while chatting and cooking, watching a young 1964 Johnny smooth the crowd over with his boyish charm and mature jokes. Kept thinking to myself how much I loved, and dearly missed, Carson.

Now again, I'm reminded of this weird thing ('thing' is the best best word for it) where right before a celebrity dies, I just so happen to have watched a movie with them in it, or searched online for clips about them, talked about them at a party...stuff like that. It's weird. It's not a random coincidence thing that I'm making up for attention. I don't foresee or predict celebrity deaths. It's not all celebrities. Just enough to have made me realize that by some strange chance, I was thinking about them alot, out of nowhere, right before they died.

I'm going to start a list of when this happens.

I feel lucky to be able to say, like so many people and generations, that I grew up with Johnny. I remember spending the night over brother Paul and Phil's down the block, (two of my gang of friends on the block), at 9 years old, staying up all night on soda, pizza, and Life cereal we'd put peanut butter on. We watched the Tonight show and this one time it was close to President's Day. Johnny did a bit where he was Abe Lincoln, in full costume, and while trying to deliver a speech, different parts of his clothes would fly off from bullets being shot at him. His tall hat blowing off right in beat with the puncline of some hilariously bad joke he was telling.
We fell back howling onto the "floor" of sleeping bags, crushed chips, and duffle bags full of Atari games and toothbrushes, the Modern Day Munitions of Sleepovers on my block. Pillows and sleeping bags bunched up against the foot of dressers and bed legs, a socio-physics anomoly; proving its possible to cram that much pre-adolescent energy into a space that *should* cause discomfort, irritability, and short patience spans.

It always sucked dismantling Camp BoyFort the morning after. But the smell of the [hosting friend's] Mom's way of cooking eggs for the Overnight Troops was always a mesmerizing alarm clock. Because every friend's sleepover had a different breakfast smell. Possibly one of the first experiences (and quite universal I'd say) kids have of learning that the world is not the same everywhere.

I also remember July of 1985, we took our family camper up to Interlochen campground near Traverse City. Running around the campground, I came back for more money to use in the garage/rec room/arcade. Standing inside the screen door of the camper, for a second I watched the little tiny TV we had in the camper, it was on the Tonight Show and Johnny was wearing a white blazer, chin in his left hand, left elbow on the desk talking to ... to....God I can see the guy but can't get the face in memory to unblur. There was just something comforting about seeing Johnny on TV late at night. You could be 5 hours away from home, bored, not knowing where anything fun to do was, but since Johnny was on TV, you still felt like the world was the same.

I had a stiff drink at TC's in Ypsi the night after Dean Martin died, the night after Christmas 95. In honor of him. And I don't drink stiff drinks really. But some men just deserve a real drink in their honor, since they did things the real way, with real class. Johnny was a class act. I need to drink for him tonight. He could infer the saucier punchline by delivering it in an opposite, and even more innocent context. The contrast of the punchline to the hinting racy nature of the setup is what made it genius. Everyone's blushing, everyone knows the subtext, but everyone from Grandma to us Cub Scouts could laugh and appreciate the joke. And noone had to explain, or recap, or reiterate. Discretion is such a lost art anymore, eapecially in comedy. If done right, the naughtiest context can sneak thru on national TV if there is class and an obvious use of strategic restraint in shaping the joke. Maybe like a Zen master riding a bull thru a china shop, without breaking or knocking anything over. Making something fit that shouldn't, if you just take the time to guide it right.

I get in the car to come to work this Monday morning and NPR reminds me that from waking till the radio dial, I forgot Johnny died. The sadness came back, and listening to Johnny do Carnac with Ed, and other bits from a montage of clips they prepared, it hit home again how much comedy and TV has really changed in the 13-15 years since Johnny's era ended. So much cynicism, anger, pessimism. (And its not lost on me that we recognize in others what we recognize in ourselves) It's a cultural thing, we can root back and break down the reasons why via media and the last 20 years of Americana, yadda yadda...

But Carson, for me, reminded of that bygone era where you just simply dressed up for certain things without question, a good joke was a requirement of a man's social skills, and having a bar in your house or basement rec room was a symbol of welcome and goodwill, not a measure of repressed escapist white-trash tendencies. Your guests came over, you fixed them a drink. Revving your bar was like bringing the nice dishes out. The skill and ceremony of making the drink was a visual and tangible statement of the hosts' appreciation and care for their guests. I choose to take the time to create and produce something for your pleasure. Now, we tell our guests to grab a Mike's Hard Lemonade out of the fridge themselves.

Anyway... the Carson clips ended on NPR. I think for a moment, wish Johnny's spirit a due rest, and hit another dial. Right on the money, the chorus of Bruce Hornsby's 'End Of The Innocence' comes thru the speakers. Life is pretty cool. 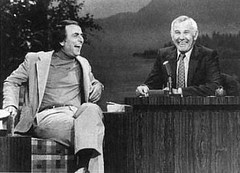 I'll bet he's laughing with so many of his dear friends who left a long time ago now.

Here's a link to a great audio piece on Johnny, from NPR.

Hey there! I'm out blogging and found yours! I have to admit, you seem to have a very well put together blog here!